More Than A Day Trip 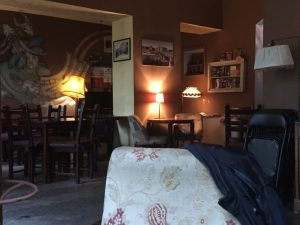 Charming Cafe in The Jewish Quarter

Following on from my last post about day trips, Kraków might seem like another location which would be a possible location for a quick visit. It’s a small enough city to see most things in a day, flights are frequent and cheap with early morning and late evening departures and it’s fairly inexpensive once you get there. (A train from the airport into the city centre takes 20 minutes and costs less than £2 each way).

But, for me, the thing which takes it off the day trip list is its proximity to Auschwitz and Birkenau, the former Nazi death camps. I can well understand a visit to these reminders of man’s inhumanity to man which happened only 70 years ago, may not be for everyone. They are undoubtedly a sobering and harrowing experience as you attempt to comprehend the systematic and highly organised extermination of those deemed expendable by the Nazis. However, for me, it would be a massive missed opportunity not to visit when you are only an hour’s drive away. 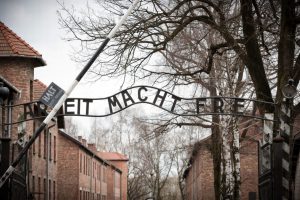 The gate at Auschwitz

There are numerous ways to visit the camps, from public transport on bus or train, to coach tours or private hire minibuses for small groups. Entrance to the camps is free, although you pay about £10 each to join a guided group which is well worth it as the guides impart their extensive knowledge efficiently and with great dignity. I believe it would lose a great deal without their commentary.

Videos of Kraków and of Auschwitz/Birkenau are available on the Barefoot Bohemian YouTube channel at https://www.youtube.com/channel/UCFswARTZPfWqJZ8-uQQ0JHw