Didn’t We Have A Lovely Day…

When I was young a day out involved a trip to the seaside, a fish and chip supper in a proper restaurant – with bread and butter – and falling asleep in the back of the car on the way home, especially if it was a trip to Blackpool Illuminations which mainly involved a massive traffic jam down the seafront and a lot of lights which looked remarkably similar after the first hour. Now a day out can be much more far-reaching and interesting. 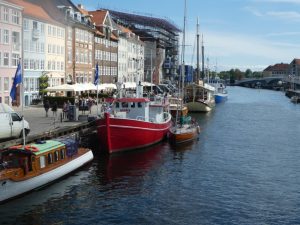 I have done day trips to Dublin, Geneva, Oslo and now I have added Copenhagen to the list. I accept it requires a few things to make it possible – a willingness to get up in the middle of the night; a budget airline operating from a fairly local airport (although this is not essential if your budget can cope with the additional costs or you have built up air miles – see note*); accommodating flight times with an outward flight in the early morning and a return flight in the evening; a city which is small and compact enough to see in a day and either the attention span of a gnat or no real interest in spending your day wandering around museums, art galleries or churches. If all, or at least most of these criteria apply to you, then perhaps a day trip abroad is for you.

The formula is pretty similar regardless of the destination, and the costs involved are comparable too, so I’ll use the details of the Copenhagen trip as an illustration.

Flight costs vary but are usually between £40 and £120 for a return flight within Europe. Transfers from the airport to the city centre are about £10-£20 each way. This was remarkably simple in Copenhagen. 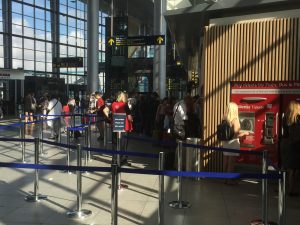 There are trains, buses, taxis and a metro to choose from. For me, the metro seemed the most efficient and cost effective. Trains and the metro leave from inside Terminal 3 and a single to the centre cost 36DKK each (£4.13). All prices are based on an exchange rate of £1 to 8.71DKK.  The journey takes ten minutes to Kongens Nytorv, which is pretty central and puts you among the shops and walking distance of many of the main attractions.

The usual hop on – hop off tourist bus costs 245DKK (£28.12) each and this includes a boat trip. In my opinion, the bus was a little disappointing but the boat made up for it, however, it does its job in taking you around all the places you need to see in a couple of hours. In some cities, it’s essential without incurring taxi costs. It also saves on doing any preparation before the trip because all the main attractions will be included. 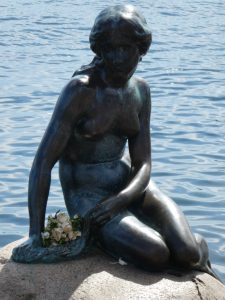 I’m not really going to review Copenhagen because tourism is so subjective and there are numerous guides which go into much greater detail than I could, however, I found the people friendly and cheerful, but then the Danes were named the happiest people in the world in three of the past four years by the United Nations World Happiness Report.

Food is good and not too expensive even in the most popular tourist areas, and the Little Mermaid is just that – little and a mermaid – but you have to see her.

*Air miles note: Clearly this is only an option if you belong to a loyalty programme with a major airline and have made enough full price flights to build up a reasonable number of miles. But if you have, using air miles can be another cheap way of travelling. To kill the myth, it’s not free. Yes, the flights can be free, or you can pay with a combination of miles and cash, but you would usually be expected to pay the airport taxes and fees. These vary depending on the airport but are usually about £50 per return trip. However, British Airways for one has another scheme which can reduce this to a one-off fee of about £35 for the return flight, if you meet their criteria (check their website – www.britishairways.com – if you are interested and a member of their Executive Club loyalty programme).

Video is now available on the YouTube Channel at https://youtu.be/3vzWmJ-yLKE