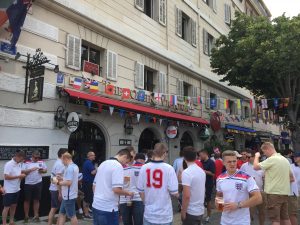 So we’ve managed to leave Europe twice in four days – both in humiliating circumstances – but I’m not going to comment on either embarrassment in this post.  I would like to expand and correct a couple of things from the last article Plan To Succeed, based on my experience in Marseilles for Euro 2016.

Firstly, I was right and also very very wrong in my assumptions about tickets.  I was right in that it was remarkably easy to buy tickets, for any game you wanted.  But I was wrong about how easy it would be to sell our surplus England tickets.  We had four spare tickets for England’s opening game against Russia in Marseilles.  The face value ranged from 100E to 140E each.  On the evening before the game, we idly chatted about how we should look for three or four times face value – and we hadn’t been drinking at that point.  We were extremely lucky to sell one for 150E but the others went to waste.  When we got to the ground tickets were being sold for half face value, and there were dozens of touts with handfuls of tickets to sell.  Doubtless many of those would remain unsold.

Not only did I want to set the record straight on that but that point also raises an interesting perspective on the activities surrounding the games – particularly the behaviour of England fans.  There is clearly an issue with ticketing and the allocation of tickets.  With so many tickets available to buy it makes a nonsense of any attempt to segregate fans according to nationality.  It would appear Russia did not take its full allocation of tickets and so a quarter of one end of the ground was given to England fans, with only a line of stewards in hi-vis jackets to separate what transpired to be warring factions. Clearly that proved woeful insufficient when Russian Ultras decided to breach the line to attack the England fans after the game.

So what of the violent disturbances and who was to blame?  Well, I can only speak from what I saw and from what I was told by those who were at the trouble spots at times when I was elsewhere, but we did spend many hours at the ‘flashpoint’ location of the old port and got a good feel for the mood of the fans.

Firstly, there was blame placed on the pubs.  I think this is totally unfair.  They all had security on the door, were asking people to leave if they felt they had drunk too much or were being unruly and served everything, inside and out, in plastic ‘glasses’.  The problem was beer sold in supermarkets which conveniently comes in bottles and because so much was being drunk there were bottles everywhere, providing ready ammunition.

Secondly, there were suggestions that the England fans were looking for trouble.  Again I think this is unfair.  I’m not whitewashing their behaviour, nor am I pretending there weren’t some idiots who were very quick to respond to aggression. Yes, they were drinking too much; yes, many of their songs were not politically correct; and yes, there were hundreds of them making a lot of noise which can feel intimidating.  But I never saw any aggression from any England fans – admittedly I was heading towards the ground when things erupted in the old port on match day having left there about 10 minutes earlier.

To give an example, at one point in the afternoon a man arrived with lots of cans.  He began shaking them, opening them and throwing them over the cars driving down the road at England fans gathered outside the pub.  He threw about ten and was gesturing towards the fans.  At no point did anyone approach him or retaliate despite cans falling down on us.  Instead, when the police finally made it the ten yards from where they were parked and removed him, there were cheers. Admittedly very different from the stories of Russian Ultras with gum shields, balaclavas, and martial arts gloves.  When they arrived some of the England did respond.  But from what we saw I genuinely don’t think there would have been any fan trouble in the port without provocation – either from the Russians or to my next point, the riot squads.

Every location was full of police, mainly smoking, eating takeaways in their vans and chatting to each other while trying to look menacingly cool in sunglasses. There were hundreds of them with riots shields, helmets, body armour and water cannons parked down the street.  The problem seems to be they only have an on-off switch.  They either did nothing or charged as if the world was ending.  There was no middle ground.  We saw many incidents – like fans up trees and bending them until they nearly broke – which could have easily been dealt with by a firm warning.  Instead, the police did nothing.  Alternatively they charged down a street of drinking fans where nothing was happening, hitting out at people who got in the way.  In Germany during the World Cup, we saw British police walking side by side with their German colleagues, talking to the fans and it worked perfectly.  In France, we saw no British police presence, although they were there, presumably in plain clothes and acting as spotters rather than calming down situations that need never have got out of hand.

But having said all that I stand by my earlier post recommending a trip and if you’re thinking of going to a similar event I believe our system is worth applying.  Unfortunately, Russia’s involvement in the violence at Euro 2016 makes the next World Cup less attractive and as for Qatar, well perhaps a different sport?

This entry was posted in Events. Bookmark the permalink.