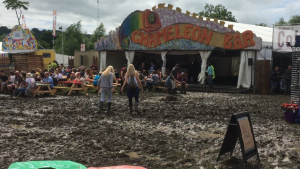 Glastonbury 2016 has been described as the muddiest yet.  It was certainly the muddiest I’ve seen.  It’s also the longest I’ve spent in the stickiest mud I’ve ever encountered.  But with a bit of planning and care, it doesn’t mean you have to abandon a ruined tent and immediately bin all your clothes afterwards.  I simply hosed off my wellies and it was as if there had been no mud.  But that much mud over the whole five days does change the Glastonbury experience, in ways I hadn’t appreciated.

Firstly, once it’s muddy there are not enough places to sit down.  The grass is no more and unless you have your own chair, you’re standing all day.

Secondly, it’s slow, hard work trudging through heavy mud and it takes much longer to get anywhere. Glastonbury is old on a 900 acre site with an 8.5 perimeter fence, which can take 30-40 minutes to walk from one side to the other in good conditions.  In the mud that we experienced this year it took 30 minutes to get between the two main stages – The Pyramid and Other stages. This means nipping to another stage to catch part of a performance becomes impossible and so you see fewer artists and hear less music – particularly from lesser known artists.

Thirdly, getting away from the site afterwards becomes a much slower process. Many vehicles needed a push and some required towing to get them out of the mud and onto the temporary metal roadways across the fields.  I spent 2.5 hours sitting in the car park without anyone moving.  Then it was plain sailing all the way out of the site. 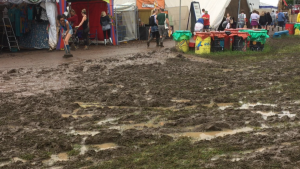 Choice of headliners and featured bands is a very personal issue with everyone having a different opinion.  Personally, I didn’t think this year’s selection matched previous years, and given the restrictions on quickly moving around the site, it was difficult to watch two artists on different stages at similar times.  But to question the event’s pre-eminence in the world of music festivals is ridiculous.  Glastonbury is no longer simply a music festival.  It’s a gathering of music lovers, a community, a unique gathering that no other British festival has ever managed to create despite the Isle of Wight festival starting to attract some big bands (2016 Headliners: Friday – Stereophonics and Faithless; Saturday – Richard Ashcroft and The Who; Sunday – Ocean Colour Scene and Queen).  I also felt that this year artists plugged their new albums rather than played their hits more than in previous years.

As I mentioned in my first post about Glastonbury (Click Here to read) the age range is much greater than at festivals like Reading, and overall the average age is much older – my impression is that it would be 30+. Glastonbury organisers do not collect information on demographics of their attendees, but in 2011 it was estimated that 15,000 of the 170,000 people attending the festival, were aged over 50. This could be due to a number of things – loyalty to the community, the price of tickets making it unaffordable to teenagers, or the choice of artists.  Perhaps as a result of this average age, the level of behaviour is also much better with far less obvious drunkeness than at other festivals.  However, what struck me this year was that of those who were staggeringly drunk, it seemed to me the majority of them were in the older age groups – 45+. Sad to see, particularly as I had my first alcohol-free Glastonbury (of which more in a later post).

So Glastonbury is still the Festival of Festivals in my opinion, and if you love music I thoroughly recommend it, despite the risk of mud.  It really is not as unpleasant as you’d think, and it is great fun nevertheless.  If you are thinking of going, then bear in mind the festival misses every fifth year to let the land recover, although this has been moved to 2018, so the 2017 festival will go ahead as normal.  And there is talk of moving the festival in 2018 to a different site so effectively there will be no break.  But you need to make up your mind well before June 2017.  Tickets for 2017 will go on sale in October 2016 and can sell out within 30 minutes, and more importantly, before that you need to register with a photo, or you will not be able to buy tickets anyway.  On ticket release day, it’s all tablets, laptops, phones and computers on the go at once to try to get through and order tickets.

Go on, you know you want to give it a go rather than sitting in your armchair watching TV highlights, and pretending to be there.

There are now videos of the mud at Glastonbury, England fans in Marseilles for Euro 2016 and a French day of protest at the Barefoot Bohemian YouTube channel – https://m.youtube.com/channel/UCFswARTZPfWqJZ8-uQQ0JHw

This entry was posted in Events. Bookmark the permalink.