Posted on 31st May 2018 by Barefoot Bohemian

I have to start with a confession. I have allowed work to get in the way of my intention to travel and to do the things I want to do. What’s worse I haven’t always enjoyed the work I have been doing, so that’s all got to change if I’m to keep faith with the intentions of this site.
Anyway, with that out of the way, I have finally got round to working towards my goal of 100 countries see the list here, with numbers 80 and 81 on one trip, and number 82 the following week.
My choices this time are probably not in many people’s Top Ten of places to visit but I was pleasantly surprised – in parts! 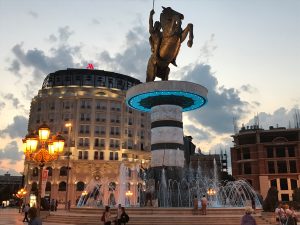 Skopje in the evening

The first stop was Skopje, capital of Macedonia, with a Wizz Air flight out of Luton and a £2.50 (180 MKD) bus ride into the city centre. As with previous trips, I booked accommodation through Airbnb, this time a city centre apartment just off Alexander Square, which was the perfect location to explore the city. 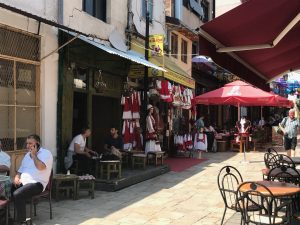 It was close to restaurants, bars, shops and the main attractions, including the Turkish Bazaar, which is worth a wander. It’s a relatively small city so it’s easy to see most things in a couple of days. If you’ve done all the usual European weekend locations and are looking for somewhere more unusual, then Skopje is only a couple of hours from the UK and worth a look.
Then I travelled to a probably even lesser known place, Prishtina, in Kosovo. I checked out trains and buses from Skopje to make the trip. There was only one train a day but regular buses, so that made the decision easy. The process was simple. I turned up at the bus station, bought a ticket for 350 MKD (about £5), and boarded a bus which left 5 minutes later. It was a 20 seater minibus, rather than a coach, but given the road winds through the mountains, that was probably a good thing.
About 35 minutes out of Skopje, we reached the border. It was a relatively painless experience which we might have to get used to depending on the outcome of the Brexit negotiations but highlighted how we should appreciate the current free movement within Europe. Passports were collected as we left Macedonia, taken away, inspected and handed back. Then we drove 30 yards and repeated the process for the Kosovo border police. This time the passport was stamped. All in all, we were on our way after about 35 minutes, but it’s a lot of faffing about in the name of sovereignty, control of borders etc. After that, it was about a two-hour drive on winding mountainous roads to Prishtina. The bus station is quite a way from the centre so a £5 taxi fare is a good idea. I managed to share with two others who’d been on the bus with me, which I imagine is quite common.
Again I’d booked Airbnb and lucked out once more – although how many great, cheap, comfortable apartments do you have to book in different countries before it’s not regarded as lucky? I have never had a bad place and never paid very much for an apartment. Perhaps the company should consider a name change though because I have never used it to find a B&B or to share a house with a host family. There are loads of great apartments you can have to yourself at very reasonable prices. (Advert over – Airbnb can contact me via this website to reward me for the free recommendation). 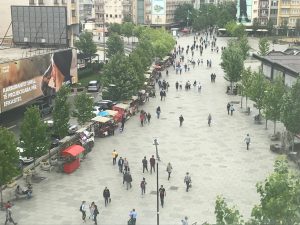 A £15 taxi ride took me back to the airport, which is a good 20 minutes out of the centre, and WizzAir flew me back into Luton.
A few days later, another WizzAir flight took me back to the Balkans (I broke the journey for personal reasons rather than work my way around the cities which was my original plan). This time the trip was to the capital of Albania, Tirana.
The airport shuttle bus into the city centre was 250 Lek (about £1.75) and took about 30-40 minutes. Again an Airbnb apartment in the centre meant everything was walking distance away. This makes it much easier to see a city in a short time. And there is a fair amount of things to see with some good bars and restaurants.

A word of warning. Tirana Airport does not yet support boarding passes downloaded to mobiles. This is a problem because you can only check in for Wizz Air flights two days before and are charged extra at the airport if you haven’t already done so. Therefore I had to find a place to print off the downloaded pdf – not a simple process as printing from mobiles is not always straightforward. For me, it involved taking a screenshot of the boarding pass, sending it via WhatsApp to the woman in the shop who printed it from her desktop computer. I guess that’s a downside of not staying in a hotel where that palaver could have been done with someone on reception, but Wizz Air could make the process simpler until all airports catch up. Still, the main cost was time, because the whole process cost me the princely sum of 10 Lek (7p).
So in summary, Skopje is worth a look, Tirana was interesting but more of a working city and less touristy, with Prishtina really only for those with a reason to go there.